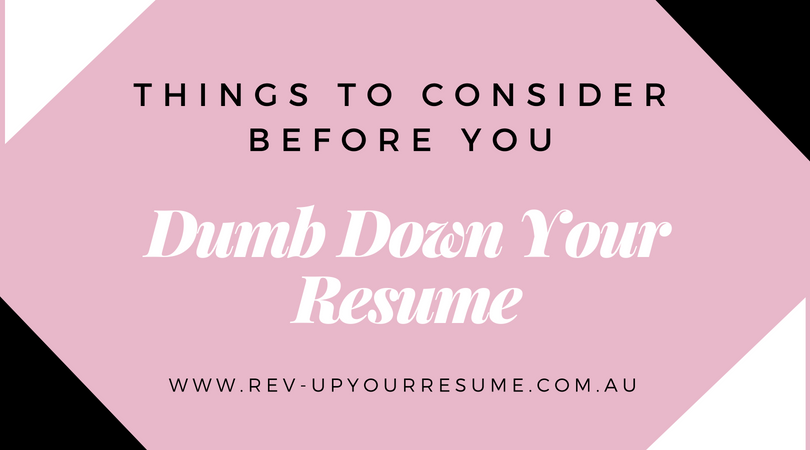 Have you ever been told by potential employers you’re overqualified for the roles that you’re targeting? Have you faced denials because you had higher skills than required? Have you thought about ‘dumbing down’ your resume by removing some qualifications, skills, advanced degrees and experiences to make yourself a better fit? Whilst this may be an appropriate strategy in some situations, you might have to ask yourself first if reworking your resume is a wise thing to do. Ask yourself the following questions:

Almost all employers rank honesty as more valuable than any other skill or experience when evaluating prospective candidates. Bear in mind that those working in the human resources field are trained to detect inconsistencies, so if the employer finds out that you have misinterpreted yourself on your resume, they might not even give you a second chance. However, don’t forget that there’s a difference between misinterpreting yourself and tailoring your resume. When you tailor your resume, your goal is not to deceive the employer but just to omit irrelevant information that’s not related to the positions you’re applying for.

Just because you’ve grown frustrated in trying to secure a new job for several months now, doesn’t necessarily mean you’re aiming too high. There could be other issues that are preventing you from getting hired. For instance, you might be committing some of the biggest mistakes on your resume, or perhaps you just need some coaching on your interview skills. Making minimal changes to your current job hunt approach can make a huge difference.

Sometimes, there are powerful reasons to take a job that is lower than your skill and experience level, hence the need to scale down your resume. Maybe you need to land a position immediately for in order for you to support yourself and your family financially. Though you might also want to consider your long-term plan. What is your ultimate career goal, and how will this role help you reach this goal?

My though on this is, if you have to dumb down your resume just to get a job, more likely you’ll not like your new job or the environment. I’m not an advocate of dumbing down a resume, but if you’re going to or feel the need to scale it down, here are some smarter ways to do it – and the things you need to avoid all together.

Smarter Ways of Dumbing Down (or Tailoring) your Resume

Also known as ‘Qualifications Profile’ or ‘Professional Profile,’ a Personal Statement is essentially an introductory paragraph that is located at the top part of your resume, under your name and contact info. Avoid lofty language and make your Personal Statement as simple and equal in depth as the job descriptions of the roles you’re trying to apply for.

Focus more on the responsibilities you performed that are matching the requirements of the position, rather than highlighting how you constantly hit it out of the ballpark or received numerous awards and recognitions. If in case you still feel the need to include quantitative achievements on your resume, use the words About, Approximately or Circa before an amount to lower the number of dollars or people from your responsibility (example: “Helped manage approximately 10 staff…”)

If the role is not a leadership one and you’ve been a leader or manager, tone down action words like Oversee, Direct, Lead, Drive, Manage, Supervise. Use words such as Assist, Help or Support followed by the action verb (example: “Assisted in overseeing…”). When 5 years is required and you have over 10, use Sharpened, Honed or Developed to describe your experience instead of stating the number of years (example: “Sharpened skills in financial analysis, modelling and reporting…”).

There’s a difference between knowledge of, ability to and doing it. If you think you’re too advanced for a skill or aptitude, say you have ‘knowledge of’ or has the ‘ability to.’ The whole point of downplaying your personal statement, accomplishments, experience and skills is to qualify and not frighten potential employers with how awesome you are.

What You Need To Avoid…

I’ve read other professional resume writers and career consultants offering tips on how to dumb down resume, with the following ideas I don’t personally agree with and why.

Generally, I don’t believe that employers think that degrees ever make candidates overqualified. Instead, an employer worries that an applicant expects that their advanced degrees entitle them to more salary, quicker advancement or other benefits than others. Also, degree is something that’s easily verifiable. If you drop it and it’s eventually discovered, then this could translate as lying by omission in order to foster a misconception. If you lied about this, what else did you lie about?

Personally, I believe that titles are meaningless and a background check on candidate can easily prove a discrepancy. So why lie and change your job titles (for instance, from Marketing Manager to Marketing Coordinator)? Keep in mind that titles are also still tied to compensation, so downplaying your job title is almost similar to devaluing all the experiences you’ve earned so far. Though generally, it’s fine to tweak your job title for as long as you’re not giving yourself a demotion or if doing so is an honest representation of the work you performed. Typically, I’d include the actual title in parenthesis. Before the parenthesis, I’d write out the instantly recognisable, more typical or even the more targeted title. Going back to the Marketing Manager example, I’d write: Digital Marketing and Social Media Manager (Marketing Manager).

Omitting previous jobs and listing only those that are more aligned with the role you’re seeking could create gaps in your work history, which are even harder to explain and might even throw all sorts of red flags. You should be ready to explain the gap in employment that this will create. You need to be able to mention something positive you’ve done during this time if you’re asked to explain a gap during an interview.

The idea of dumbing down a resume is to create a ‘lesser’ version of you, not a ‘dishonest’ version. Before you start dumbing down your resume, keep in mind that your resume will be held on file somewhere and that the dumbed down version will be kept. You will have to explain this job in the future.

For more ideas on how to craft winning resumes, take a look at these samples.