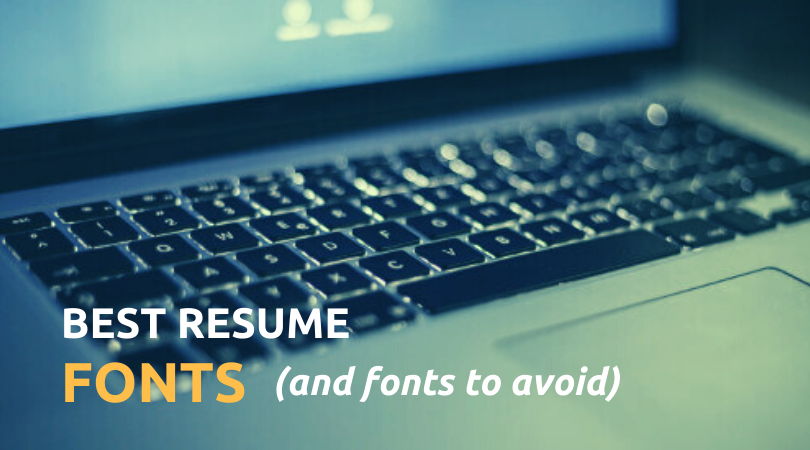 Selecting and deciding on the fonts to use on your resume is equally important as choosing the format. If you don’t give some thought in the selection of the right font, your job application may not turn out as effective as it would be with the correct one.

Using an unprofessional font and questionable font sizes might disqualify you from consideration for nearly all job applications! Conversely, using the right font and size will make your resume look professional while still making it stand out from a sea of other job application documents.

Best Fonts to Use on a Resume

A classic serif typeface like Garamond will give your resume a timeless yet polished look that’s much more interesting than the stale and outdated Times New Roman. This font is also perfect for experienced professionals who are struggling to condense their resume to 2-3 pages, as this font will allow you to fit more text on a page without compromising readability by decreasing font size or tightening up the spacing.

Calibri is a perfect choice for a safe, universally readable font. Aside from being familiar to most readers, Calibri also renders well on various computer screens. In addition, 12-point Calibri also produces ‘perfectly-sized’ 2-page resume consisting of 550 to 750 words.

Cambria is designed specifically to perform well on computer monitors. The creator of this font describes it as the new ‘Times New Roman’ developed specifically for on-screen reading, whilst still remaining applicable for printing because of its robust letter construction that retains readability even at small sizes. This makes Cambria the perfect choice for both online and printed resumes.

Considered by many designers and typographers as the ‘king of all fonts,’ Helvetica has been used in major corporate logos because of its fresh, clean lines and exceptional clarity. Consider using Helvetica if you want to achieve a clean and contemporary, yet professional look for your resume.

As an another alternative to Times New Roman, Georgia has thicker strokes which makes it legible even at small size. It is less curvy, giving your resume a more corporate look. Plus, its looks great if viewed on any digital document, such as if you intend to distribute your resume as a PDF.

Worst Fonts to Use on a Resume

Times New Roman is possible the most widely chosen fonts on resumes – the very reason why you should avoid it. You might want to consider something else if you don’t want your resume to look like hundreds of thousands of other resumes.

While Times New Roman is highly readable and safe, be aware that using a generic font like this might convey laziness and lack of creativity, and it is unlikely to stand out in a sea of resumes. In addition, Times New Roman is hard to read at very small sizes and doesn’t display well on computer screens.

Arial is another overused font which may be perceived as a lazy choice by Hiring Manager and Recruiters alike. In addition, Arial is basically just a variation of Helvetica with a loose and irregular construction. There’s nothing wrong in using common fonts, but there are better font choices out there for your resume than Arial.

Courier is designed to imitate the appearance of typewriter which might actually make your resume look like it has just been produced out of a typewriter. It is also more commonly used for academic papers when you don’t have too much to write and just need to make your paper look a bit lengthy. It does not help with your profession at all.

Comic Sans is possibly the cardinal sin of all font choices when it comes to resumes. It’s casual, almost ‘immature’ look makes it distracting in any serious context, as it conveys a rather flashy or funky appearance.

With its thin letters, Century Gothic is very hard to read particularly at small sizes. Another downside is that it’s wider that most fonts, so it takes up that precious space on the pages of your resume.

Other Rules of Thumb in Selecting a Resume Font

We recommend using a range between 10-12 size font. Though it’s important to note that some font styles run bigger while some run smaller. For that reason, it’s important to decide on the style FIRST before making a judgment on the font size. Another important thing to keep in mind is that font size affects the length of your resume. If your resume is just a line or two over 2 pages, or just a few lines from filling an entire page, adjusting the font size by 0.5 can make the text fill out the rest of a page or prevent it from going over the succeeding one.

Ideally, your resume should be in black font. The use of coloured fonts might be good if you’re in the creative sector, say graphic design, arts, or film.

Want to stand out in a sea of highly qualified job seekers? Click here to ask us how. Or check our sample resumes here.