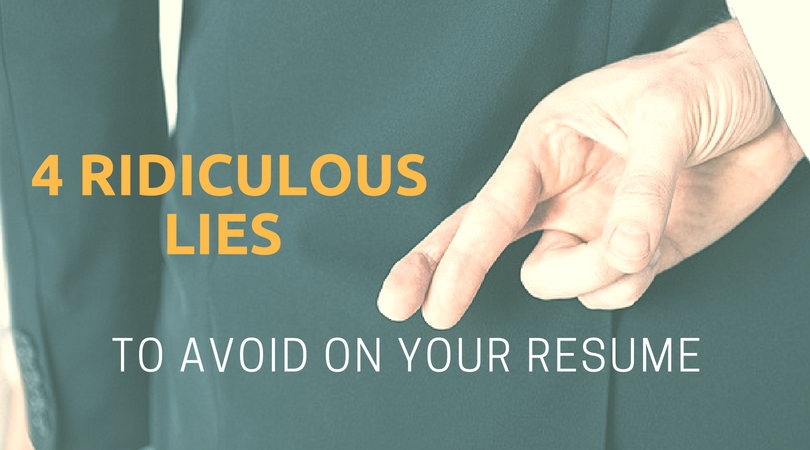 Job advertisements are often accompanied with an exhaustive list of qualifications that employers want to see in their ideal candidate. Applicants, on the other hand, also want to stand out to as many employers as possible, and some resort to beefing up their qualifications to get their foot in the door. This can be particularly enticing when an applicant has some but not all of the required skills listed in a job ad.

More likely than not, if you lie on your resume, you’ll find yourself skating on thin ice. Whether it’s a little white lie or an intentional fabrication, getting caught could amount to career sabotage, especially since today’s technology advancement and social media environments make it easier to get caught.

So, for the sake of your career, here are the top 4 lies you need to avoid on your resume now.

Risks of lying: Creating a degree you don’t have is quite easy. All it takes is some word processing ability for you to take your 2 semesters at the University of Melbourne and transform these into a Bachelor’s Degree in Civil Engineering. Or to completely fabricate a Bachelor’s Degree in Chemistry at some other school you once drove by.

Though you can lie on your resume, it’s strongly advised that your don’t. A simple Google search will provide you with a long list of well-known names who decided to take the chance and lie about their degrees. But it eventually came back to bite them. People have been caught years later during a standard background check for a promotion, or when something they did became well know and people started snooping. After years of hard work and establishing a good reputation in your field, the last thing you want is to be discovered and branded a liar. Not only will you quite likely to lose your job, but the bad reputation will follow you for the rest of your career.

Instead of lying: There are many career opportunities for which a degree isn’t required or which experience trumps a degree. If there is a position where a degree is required, try to look for a person inside your dream company who can attest to your experience to help explain to the Hiring Manager why you’re qualified for the role, even without the necessary degree. Or in the case of an irrelevant academic degree, try to highlight your transferrable soft skills (such as communication, prioritisation or leadership abilities) on your resume to shift the Hiring Manager’s attention from your lack of relevant education to the capabilities you can offer your potential employer.

Risks of lying: Whether you’ve been out of work, took off time to raise a child, or have been on a sabbatical, gaps on your resume can be an interview killer. If left untouched, unexplained gaps raise red flags which could potentially lead your resume to land on the ’no’ pile.

The last thing you want to do when addressing resume lapses is to lie about it. While it’s tempting to stretch the dates you worked for a company, or add an imaginary role, if the Recruiter or Hiring Manager does his or her due diligence, which they likely will, they will uncover the lies and there goes your change of securing the position. Worse if you’re applying for a job in a small sector, the word of your lies will travel and slander your reputation of the years to come.

Instead of lying: As mentioned in this post about the types of job seekers struggling to land job interviews, the best strategy to address large holes in your career history is to use the ‘Functional’ resume format by grouping together similar activities in headings like ‘Project Management Experience,’ ‘Sales & Marketing Experience’ and so on. This keeps your succession of jobs from being noticed immediately. Another strategy is to create a ‘Key Career Highlights’ section near the top of your resume, where you can enumerate your most noteworthy achievements regardless of when they occurred. You can also highlight the skills you’ve developed while out of the workforce, including your volunteer activities. For full-time moms, you can always include your organisational, time management and financial management skills, all polished while taking care of your children.

Risks of lying: The stark truth is, many applications have done at least some ‘creative job title engineering’ at some point. In some occasions, applicants tweak their job title on their resume because the title they worked under didn’t quite fit with what they were doing. But did you know that once you change your actual job title to something different on your resume, it is seen as lying by the HR personnel?

Consider this scenario: if a potential employer calls one of your former workplace HR staff, the job title you have on your resume better match what is on your personnel record 100% of the time. Don’t fall into the lazy assumption that: “Well, everyone at the company I knew I did so much more than that job title. They’ll roll with it and understand.”

The potential employer is not going to be as understanding about any job title modifications. Anything different than what is on your official record is a warning sign and could lose you a job offer as a result. Your eagerness to communicate the actual level of your work can be misunderstood by a potential employer as an intentional attempt to lie.

Instead of lying: There’s a smart way of tailoring your resume to get across the function of what you did when the job title doesn’t do it justice, without misrepresenting yourself. A quick win to solve this common problem is to provide the information as follows:

Risks of lying: While some applicants unknowingly undersell their contributions to their former employers, others have a habit of making it seem like they oversaw an entire project end-to-end when they were merely had a minor role in a specific project stage. Imagine you stated: “Project managed a comprehensive social media campaign the led to 50% growth of Twitter followers,” when in fact, you only designed a great photo. This puts you in the uncomfortable position of trying to explain away a resume bullet that stretches the truth. Also imagine how awkward the background check would be if a potential employer called your ex-boss – the person who really oversaw the project.

Not to mention, even if your embellishment gets your foot in the door, if you’re actually hired, you may end up in a position that’s way over your head. This could lead to a mismatch in skill sets or underperformance on the job, despite the claims you earlier made on your resume.

Instead of lying: Using compelling actions words such as facilitated, generated and enabled, are good ways to make small tasks look bigger, as long as using them doesn’t result in a lie. Find the fine line between exaggerating and underselling yourself by telling the truth, the whole truth, and nothing but the truth.

Going back to the earlier example, if you wrote that you were “in charge of preparing graphics for social media campaigns,” you’re only telling a half-truth. Of course, you don’t want to say that you “managed the entire project” because that would be an outright lie. So what’s the fine line? Tell them that you “facilitated the development of visually compelling graphics that helped grow Twitter followers by 50%.” Do you see how this works? You were more specific about what you did and were able to tell the truth, making your accomplishment much more impressive without having to lie.

Also, ask yourself 2 questions before deciding whether to list company accomplishments on your resume: 1) Would you comfortable talking about the achievements in detail in an interview? 2) Would your bosses vouch for what you’ve written on your resume?

When searching for a new job, you don’t want to get into the habit of stretching the truth on your resume. One little ‘white lie’ can come back to bite you in a big way. Instead, find ways to creatively tell the truth in your application document. No matter how small you think they are, they are yours and you should be proud of them.

For more ideas on how to craft winning resume, vist www.rev-upyourresume.com.au or connect with us through LinkedIn, Twitter, and Facebook.

2 thoughts on “4 Ridiculous Lies to Avoid on Your Resume”